PhiAcademy GmbH represented by IP Consulting Ltd appeal Invalidity Proceedings No ICD 109 762 against registered Community design No 6 588 778-0001 (“the contested RCD”) before of the Third Board of Appeal.

By a decision dated 25 October 2021, the Board set aside the decision and declared the contested design invalid.

The designs under comparison are the following: 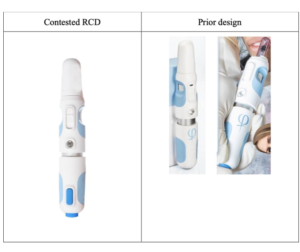 Both designs show applicators for subcutaneous implants. The designs coincide in the overall structure of an elongated pen like shape comprising a top rounded cone in white, a middle section in white with two indentations in opposite sides in blue and a rectangular white button in the middle above a metallic screw, a metallic cylindrical ring, and a lower section straight in the sides and rounded in the bottom followed by a blue button.


The designs present merely one difference in the additional blue rectangular button in the lower section in the contested RCD which is absent in the prior design.

In accordance with Article 6(1)(b) CDR, a registered Community design is to be considered to have individual character if the overall impression it produces on the informed user differs from the overall impression produced on such a user by any design which has been made available to the public before the filing date of the application for registration or, if a priority is claimed, the date of priority. Paragraph 2 of the same provision establishes that  freedom is to be taken into account in the assessment.

The greater the designer’s freedom is developing the challenged design, the less likely it is that minor differences between the designs at issue will be sufficient to produce a different overall impression on an informed user.


The “informed user” within the meaning of Art. 6 CDR is neither a manufacturer nor a seller of the products in which the designs at issue are intended to be incorporated or to which they are intended to be applied. Without being a designer or a technical expert, the informed user knows the various designs which exist in the sector concerned, possesses a certain degree of knowledge with regard to the features which those designs normally include, and, as a result of his/her interest in the products concerned, shows a relatively high degree of attention when he/she uses them (20/10/2011, C-281/10 P, Metal rappers, EU:C:2011:679, § 59; 22/06/2010, T-153/08, Communications equipment, EU:T:2010:248, § 47).

The appeal is well founded. The contested decision is be annulled and the contested RCD declared invalid on account of its lack of individual character, Article 25(1)(b) in conjunction with Article 6 CDR.

FAMILY FARM – is a descriptive term and does not misleadSOLEI vrs. SOLIO – EUIPO confirms likelihood of confusion