Refan Bulgaria EOOD is a Bulgarian family-owned brand, specialized in perfumery and cosmetics. It has been on the market since 1991 and received a quality award from Forbes in 2014. The company is represented by the team of IP Consulting.

In their wide catalogue of products, Refan Bulgaria EOOD also offer cosmetics supplies. In 2012, 27th of April, Refan filed and registered a Community design (RCD) with No 2 034 009-0001 for “washing sponges, soap bars”. The RCD is duly renewed and represented in the hereby picture: 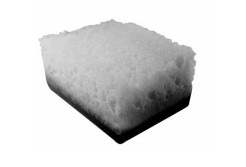 By doing so, they became known as “the design holder”.

On the 5th of September, 2017, Aroma Essence Ltd filed an application for declaration of invalidity of the RCD. They claimed that the RCD lacked novelty (Article 5 of CDR) and individual character (Article 6 of CDR). They attached three different prior designs as a base of their application.

The decision in case R 2361/2018-3, regarding the contested RCD, was taken by a Third Board of Appeal. The conclusion of the previous invalidity proceedings before EUIPO was that the RCD was novel and possessed individual character. The design holder reiterated that the conflicting designs differ in their overall shape and structure. There are also differences in proportions and surface of their layers and contrast of colours. Furthermore, the design has an upper and lower part which are clearly defined in the graphic representation of the RCD registration. The design holder insisted that the possibility the products to be placed in both directions is a mere presumption.

On the 31 October 2018 the Invalidity Division rejected the application for a declaration of invalidity. It did so on the grounds that the prior designs are not identical to the contested RCD.

Furthermore, the designs produce a different overall impression on the informed user – a person who is familiar with sponges and soap bars. A simple rectangular shape is a banal shape for a washing sponge and won’t attract the attention of the informed user.

However, the base layer of the contested design is thin and dark and the upper layer is light, in a proportion close to 1:4 in comparison with earlier designs. The earlier ones have a complete opposite structure with a light base layer and a dark upper one.

Lastly, the concentration of large holes in the contested design cannot be neglected as those shapes are sufficiently visible and unlike other model.

As a conclusion, the RCD has individual character and meets the criteria of Article 6 CDR. The application fails on both pillars.